Governor Gretchen Whitmer has signed a new executive order to protect the environment after Michigan’s Republican legislative majority rejected her first one.

Those commissions – which could oversee approval of permits and regulations – allowed for corporations to hold a seat at the table, effectively policing themselves. Former Governor Rick Snyder signed that legislation – dubbed the “fox guarding the henhouse” – before he left office and appointed all the members he could, leaving Whitmer without an appointment until 2020.

That move came after Whitmer had also asked Attorney General Dana Nessel to opine on whether the commissions were constitutional in the first place – a decision which is still forthcoming. Whitmer’s revised order, released today, is largely the same as the previous one but for now keeps the commissions the GOP created in place.

“Every Michigander deserves safe, clean drinking water, and I’m not going to let partisan politics slow down the important work that needs to get done right now to protect public health,” Whitmer said. “That’s why I’m taking action to sign this new executive order so we can start cleaning up our drinking water, protect the Great Lakes, and take action to address climate change.”

One of the positive things the previous executive order did (and this one too) was to create positions for members of the public to have a say on pressing environmental issues, through the creation of a Clean Water Public Advocate and Environmental Justice Public Advocate. This executive order also still enters Michigan into the U.S. Climate Alliance in an effort to work with 19 other states (Michigan is the 20th) to reduce greenhouse gas emissions and carbon pollution. 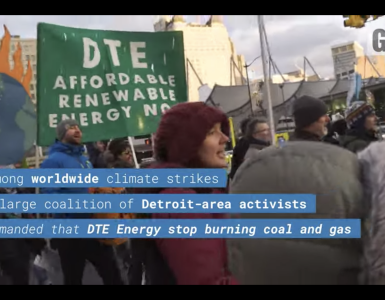 Among worldwide climate strikes, including at the Michigan Capitol, a large coalition of activists demanded that DTE Energy stop burning coal and gas and use one hundred percent solar and wind energy by the year 2030...