The American Civil Liberties Union of Michigan and the Michigan Immigrant Rights Center are demanding the Kent County Sheriff’s Office and Kent County Board of Commissioners investigate how an American citizen and decorated veteran was taken into U.S. Immigration and Customs Enforcement custody for deportation.

The individual in question is Jilmar Ramos-Gomez, who was born in Grand Rapids and grew up there before serving in Afghanistan in the U.S. Marine Corps between 2011 and 2014. He was decorated with a national defense service medal, a global war on terrorism service medal, an Afghanistan campaign medal, and a combat action ribbon, among other awards, the ACLU said.

Unfortunately, he returned home from war with post-traumatic stress disorder, and has had episodes where he disappears and then has no recollection of where he’s been when he is found.

Such an incident occurred last November when he was arrested after apparently damaging a fire alarm at Spectrum Health and trespassing on the heliport – the latter of which he pled guilty to. Ramos-Gomez had his passport on him at the time of arrest and pled guilty to the trespassing charge, at which point he was released on personal recognizance bond.

But instead of releasing the veteran at that point, the ACLU of Michigan says the Kent Sheriff’s Department worked with ICE agents to enable his transfer to an immigration detention center in Calhoun County to start the deportation process. Ramos-Gomez’s mother arrived at the jail to bring him home, but she was told he was in U.S Immigration and Customs Enforcement (ICE) custody.

By the time anything was cleared up, the man had spent three days in the Calhoun immigration detention center.

“It is incomprehensible that the Sheriff’s Department turned a vulnerable, mentally ill United States citizen over to ICE so that he could be deported from his country—a country for which he fought on the battle field,” the ACLU of Michigan said in a letter sent to Kent County officials. “Mr. Ramos-Gomez risked his life protecting the rest of us. When he needed mental health services as a result, our government failed him. And now, Kent County has further failed him by facilitating ICE’s efforts to illegally detain and deport him.”

Kent County is not the only place in Michigan to have a contract with ICE. In fact, ICE has contracts to send detainees to facilities in Chippewa, Monroe, St. Clair counties and Calhoun County. Ionia is currently debating whether it will permit a private contractor to revamp the now-closed Deerfield Correctional Facility to be a detention center as well.

The ACLU and citizens in Grand Rapids, especially Movimiento Cosecha GR – part of a national, nonviolent movement fighting for the respect and protection of all undocumented immigrants – have called on the county and the sheriff’s office numerous times for over a year to terminate their contract with ICE. Advocates have documented abuses of immigrant children by ICE agents and say the county is complicit with ICE’s actions so long as they maintain the contract.

“While what the Kent County Sheriff’s Department did to Mr. Ramos-Gomez is unfathomable, it is also utterly unsurprising. This is exactly the type of incident that advocates have warned could happen,” the ACLU said. “Research has shown conclusively that local law enforcement’s collaboration with ICE increases instances of racial profiling, and sows distrust between the community and law enforcement. This voluntary practice can be stopped at any time. The time to do so is now.”

In addition to demanding an investigation, the ACLU and MIRC are requesting, through the Freedom of Information Act, all records in the possession of both Kent County and the Kent County Sheriff’s Department regarding Ramos-Gomez, including those related to his arrest, transfer, and detention, as well as communication between ICE and the Kent County Correctional Facility, and more.

The ACLU looks to receive a “full and complete report” at the January 24 Kent County Commission meeting describing “why and how this appalling incident occurred, as well as a report on whether Kent County and the Sheriff’s department are finally ready to stop using county resources to deport community members,” they said in their letter.

The Great Lakes Beacon has sent a request for comment from Kent County and will update this story as more information becomes available. 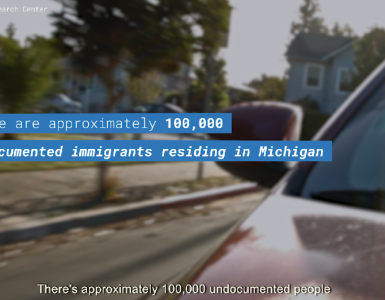